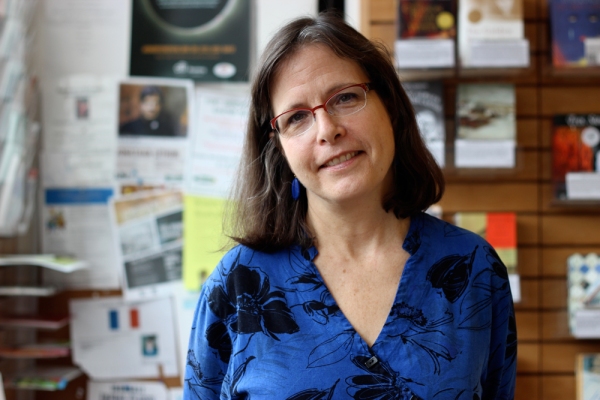 Laura as a young girl.

I was brought up on European folk tales. In one, a girl cuts off her finger to put in the keyhole of the door that bars her brothers from freedom. In another, a girl is dragged off a rock and drowned after some water babies discover that she’s told their secret. During summer vacations, my father would spin installments of an epic tale that featured my siblings and me in the role of heroes. No wonder I believe in the power of stories.

My first foray into the world of the printed story was inauspicious. In the fall of 1964, I went off to a public school in Brooklyn where I learned to read with Sally, Dick, Jane, Puff and Spot. I don’t remember being bothered that no one ever did anything interesting. But I do remember being quite irritated when Sally asked repeatedly, “Where is Puff?” after the previous sentence had stated that Puff was now/here. If Puff was now here, why all the fuss?

Soon enough, I became an avid reader. In Middle School I went often to the public library without a specific book in mind. The only thing I knew was the first letter of the last name of the author, which had been determined by one of the many ritualistic systems I’d devised. As a result I read some books that weren’t standard Middle School fare, and picked up words like “opine” for my every day use.

Laura leading a matching game after a reading of “Who Has This Tail?” at the Greenlight Bookstore, Brooklyn.

I went on to get a BA in English Literature and an MS in Reading and Early Literacy. After many years as a second grade classroom teacher, I turned my focus to struggling readers and writers. In my current role as learning specialist and my former position of adjunct faculty member at Bank Street College of Education, I have helped teachers  develop strategies for individual students and design curriculum to address a wide range of learning styles. And I’ve worked with hundreds of students from whom I continue to learn more about teaching.

Thanks for joining me! I hope you’ll check out For Parents & Teachers. I’ll be sharing my reading games that are easy to make and fun to play. Each month I’ll also highlight a book or series that I’ve found works well for young children.