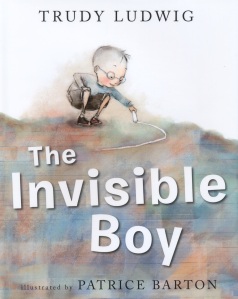 Explore the issues of feeling invisible and being laughed at in The Invisible Boy. The text and illustrations work together beautifully to show Brian’s predicament.

In spare, moving prose, Ludwig shows Brian’s occlusion by his classmates. In the classroom, Sophie and Nathan’s histrionics obscure his presence. On the playground, as the friends of the best friends get picked for kickball, Brian is the odd one out; and he’s the only one at a lunchroom table who isn’t invited to a birthday party. Brian’s role in the group begins to change when Justin joins the class and his Asian lunch is ridiculed by the dominant boy. From the note Brian leaves in Justin’s cubby, the new boy recognizes Brian’s compassion and his artistic creativity, which leads to a fledgling partnership. We are left with the belief that this is just the first in what will be many connections for Brian.

In the illustrations, movement and color are contrasted with stasis and black-and-white images to convey Brian’s marginal position and his subsequent emergence into the mainstream. Instinctively, children respond to Brian’s isolation and are driven to respond to the story line. But for those adults who like a little guidance in exploring delicate social issues, there are useful questions for discussion included in the back of the book.