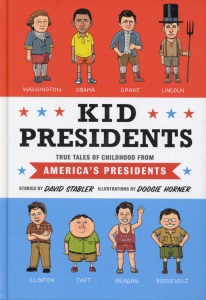 This book is chock full of lesser-known facts about the beginnings of our nation’s leaders.

Kid Presidents in divided into three sections: After-School Activities, Fantastic Journeys, and It’s Not Easy Growing Up. Childhood events of five or six presidents are told in each of the three sections. In addition, each section includes two comic interludes: a short section with just a couple of sentences about seven to eight presidents where we learn about pranks the boys played (Prankster-in-Chief) or get a snippet of an early report card, for example. The book ends with a lesser-known fact about each of the 44 presidents.

The intent behind this new book is to show that even people who excel their way into the Oval Office started out as kids with regular old concerns: Bill Clinton was chastised by his teachers for hogging airtime, John F. Kennedy was bullied by his brother Joe, and Gerald Ford had an anger management problem, to name a few. In some cases, a well-known attribute started off as a childhood hobby, such as Teddy Roosevelt’s interest in taxidermy and Ulysses Grant’s horseback riding prowess. The chapter that sticks with me outlines the tribulations of FDR growing up with a pathologically overbearing mother. Helicopters may not have been invented yet, but make no mistake about it, helicopter parenting existed in the late 1800’s.

This book will intrigue the child who likes to be an expert on trivia and starts with some knowledge of the American presidents. It has the added advantage of having chapters that stand on their own, so it’s not necessary to read all of them. But be aware that the font size and ratio of pictures to text are misleading. The ideal reader needs a large vocabulary and a sophisticated understanding of sentence structure. Barry Obama’s chapter includes words like afflicted, turbulent, submerged and ramshackle. Here is a sample sentence from the FDR chapter: Wary about letting her only child fall in with the wrong crowd, Sara insisted on selecting Franklin’s playmates. I haven’t used this book yet since it has just been released. But I’m thinking that a chapter could provide practice in using context clues to understand unfamiliar vocabulary words.

The other feature of this book to address is the illustrations. They are dynamic little drawings depicting vivid facial expressions and decisive action, complete with speech and thought bubbles. With their bold coloration, they are quite alluring and are an engaging feature of this book. But the style that is based on exaggeration often crosses the boundary into stereotyping. It concerns me that a child who has difficulty navigating the language is left with the take-aways provided by the pictures. Instead of laughing along with these presidential boys, I worry that these readers may stand aside and laugh at them.