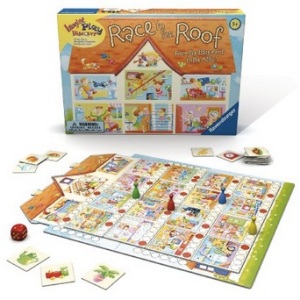 Race to the Roof is a fun family game that develops visual discrimination skills. Players sift through the detailed interiors of apartments to find objects pictured on cards.

To begin play, the room cards are fitted into the building outline. Players take turns rolling a die and  moving spaces along the winding track from the first floor to the roof. When a 6 is rolled, an object card is picked up, and the player moves to the red dot under the room that object is in. Sometimes this results in moving back towards the beginning rather than advancing towards the roof. The object is to be the first one to get to the roof.

The rooms are full of intricate details which are intriguing to children. And for those interested in home decorating, they can set the board up to make a pleasing array of rooms in an apartment. Beware: in the original version, all the people are white with the exception of one ethnically ambiguous person in a sari-like outfit. The game has been updated, and I’m hoping it incorporates the diversity of an actual apartment building population. Another cautionary note: This game involves a lot of being sent back Candy Land-style. As a result it can take a long time for one player to get to the roof. You might want to set a timer and see who gets closest to the roof in the given time.