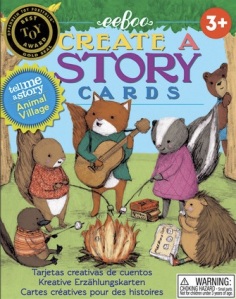 Tell Me A Story ANIMAL VILLAGE CARDS has kids of all ages spinning a good yarn.

There are 36 cards in the deck with repeated characters, locations, and props which facilitate linking the cards into a narrative thread. For the youngest language learners, you’ll sequence 5 or 6 cards and tell a story. You’ll want to use repetitive language, so that the next time you tell it, your child can chime in. For example, each character around the fire can have a turn to say, “I want one too!” If you can come up with a simple little two or four-line musical verse, young kids will mimic that as well. For children with greater language facility, you can deal them their 5-6 cards (I would hand pick them to begin with) and they sequence them and then tell a story. You can use these same cards to tell a different story, or use your own 5-6 pictures. For older kids, you can deal out 6 cards to each player, and play the cards in turn as each player adds to the story line. But beware: this makes for a meandering tale with characters getting dropped along the way–it’s not a way to model a tight narrative structure. Alternatively, you could predetermine a number of chapters in the story the group composes in order to tighten the narrative parameters. Full disclosure: I haven’t tried this variation.

These card sets are incredibly popular for obvious reasons. The colorful pictures are instantly legible, and who doesn’t love creating a story? One complaint about the fairy tale set is that it doesn’t include as many recurring props as the other sets; another is that the humans are overwhelmingly white.