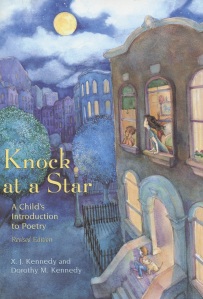 “Poetry many not be able to redeem the world, but it offers lasting satisfactions. It can sharpen the wits, fire the imagination, perhaps even leave the reader with a grain of wisdom. It can heighten the experience of being alive. This seems enough to ask of it.”

This collection of poetry was originally published in 1982, and I was lucky enough to find it as I prepared my first poetry unit in a third grade class. What makes the poetry in this collection unusual is its accessibility to children. The Kennedys have bypassed some of the most famous poets and many of the classic long-form poems. Instead the authors have included smaller poems so the reader can appreciate the whole form; and they have targeted  poems with subjects children can relate to. In the revised edition of Knock At A Star (1999), the authors have made an effort to include more contemporary poems: seventy-five of the 179 poems were not in the original collection.

The intended reader of this collection is a child between the ages of eight and twelve who is interested in perusing the poems and concepts independently. But the lay-out of the book makes it exceptionally useful to teachers who are looking for mentor poems that illustrate the different elements poets work with. The second chapter is entitled What’s Inside A Poem? and it’s divided into sections on images, word music, beats that repeat, likenesses and word play. Try using Ruth Whitman’s Listening to grownups quarreling as a mentor poem, and watch kids plumb their depths to discover something new about themselves and their place in the world. None of the commonplace Roses are red/Grass is green twaddle!