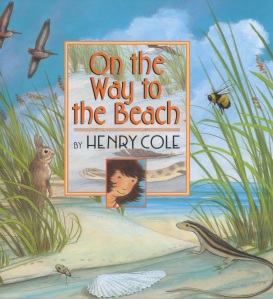 Curiosity is rewarded by the beautifully detailed illustrations in On the Way to the Beach by Henry Cole.

In detailed watercolors and simple text, Henry Cole invites the reader to wander through the habitats of a forest, a salt marsh, and sand dunes before finally arriving at the beach. Illustrations of a long view of the habitat are alternated with carefully rendered close-ups that are revealed by opening a cut-away gatefold. This is an appealing way to entice young readers to observe the variety of specimens of flora and fauna in each habitat. Children love pointing out the creatures and plants they spot. There is a list of the specimens in each close-up, so adults can attach the specific label to the animal or plant a child finds. For older children, the list can be used as a starting point, directing their search. Many of the specimens are likely to be unfamiliar, but there are clues that help: “a coot taking off” fits with the bird skimming the water and “a salt marsh skipper butterfly” is clearly the one butterfly pictured. For those children of the fact checking frame of mind, there is an answer key provided at the end of the book.

Shifting gradually from darker and closed in, beginning with the forest, to lighter and airier as the beach is approached, a palpable sense of movement is conveyed in the journey. The alternation between wide angle and telephoto approaches to the setting highlights the contrast between what it’s like to visually scan an environment and what it’s like to observe the details.  The strength of this book is unquestionably the stunning illustrations. The text simply serves as accompaniment with the exception of the repeated line: “I wonder who’s watching me?” Acknowledging that youngsters are avid fans of line repetition, I was still bothered by these reiterations as I was getting to know this book. It seemed to me to be an unwelcome invitation for children to assert their egocentricity in the midst of exploring nature. As I have gotten to know the book well, though, I have come to see the question “I wonder who is watching me?” in a completely different light. Now I understand it as an invitation to children to imagine the scene from an animal’s point of view, thereby suggesting that they are part of a great web of being. On the Way to the Beach is a beautiful book that inspires wildlife enthusiasts in word and deed.