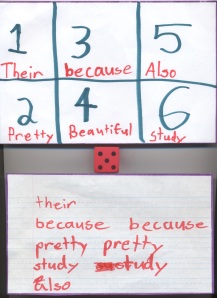 To prepare for this activity, the child makes a large square which then gets divided into sixths. Each sixth gets a number from 1 to 6 in it as well as one of the words to be practiced. Now the fun begins. The player rolls a die, sees which word is in that numbered square, and writes that word on the score sheet. What puts the pep in this activity is the use of a timer. You can use a three-minute salt timer from a game such as Boggle, or a kitchen timer or stopwatch which can be programmed for the amount of time that fits a particular child. When the time runs out, the child tallies the number of words s/he wrote; then in the next round,  increasing that number becomes the goal. It’s important that the letters are said aloud as they’re written in order to open an auditory memory avenue to aid in retaining the spelling.  This is a game of solitaire, though kids enjoy being at a table together when they play it.

The same set-up can be used to develop automatic responses in many different areas: tricky math facts and proper letter formation are just two that come to mind.