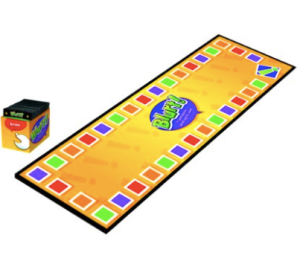 Blurt! is a raucous game of verbal fluency. At heart it’s about word retrieval, but it also works to develop vocabulary and increase familiarity with the abstract language of definitions.

As in Taboo or the old-fashioned Password, you are trying to guess the word written on a card. In this game, the prompt you’re given is a definition. The 200 word cards are double sided, providing two different levels of play. An example of an easier prompt is: “A person trained to treat diseases and injuries.” Most of the target words on the beginners’ side of the cards are likely to be in an average first grader’s vocabulary. A prompt from the advanced side of the card is: “A small cone-shaped target struck with rackets in the game of badminton.” The words on the more difficult side are not all this obscure, but there are plenty of words that aren’t in a modern urban fourth grader’s lexicon: locust, joust, and dynasty, for example. Based on a random sampling of cards, I found 88% of the target words to be nouns. But because they come from such a wide range of topics, the success of the game is likely to vary tremendously from one group to the next. Anticipating this situation, the Instruction Manual provides rules for playing as teams or in partnerships, in addition to the each-player-on-her-own standard format. There’s also a variation that eliminates the necessity of a speedy response by having teams write down the word they want to guess.

Players track their progress on a long, narrow game board with 31 squares of different colors. There are many hurdles to keep the game interesting. For example, if the color you land on matches your playing piece, you can challenge a player ahead of you to a one-on-one face-off. If you win, you swap places with the other player. The same thing applies if you land on an already occupied spot on the board.

There are elements of this game that I love. It has the first card box I’ve ever seen that has one side labeled DRAW and the opposite one labeled DISCARD. It’s about time someone thought of that! The gimmicks to spice up traveling around the game board serve to make the board an integral part of the game (as opposed to the superfluous game boards in DixIt or Wise and Otherwise, etc. ) The drawbacks I see are that the game board is too small to comfortably accommodate 4 pairs of players, and that there’s a large swath of second to fourth graders for whom neither side of a definition card is appropriate. I’d use the easier prompts to help students quickly process the language of dictionary definitions. I’d also have students help me make our own Blurt! deck of content-specific and general vocabulary words for classroom use. And finally, I’d tell families to buy this game for fun at-home play with a variety of ages.